Skip to content Skip to sidebar Skip to footer
SVFK

Spanish architect and designer Omayra Maymò has made her first prototype. This is based on a new approach to production and with the qualities of the element in mind.

The idea behind Free Folding

‘Free Folding’ originates from a research that began in 2016. Here I studied how to provide a controlled amount of freedom to a material during its industrial manufacturing. In other words, I explored how to leave some space for the material to partially decide its own shape. This stands in contrast to imposing a preset form on it disregarding the material’s natural properties, as we normally see in our industrial processes. The aim of this new approach was to push the boundaries of our industry and take advantage of the power of our mass-production tools. Thereby directing it towards more meaningful and human ways of manufacturing.

In the course of that project, I opened an experimentation line in which I started manipulating metal sheets. This involved observing their behavior while pressing them, wrinkling them and folding them in different ways that would generate new aesthetics and identities for the material.

Free Folding at SVFK: bringing the idea to life

During my residency at the Metal and Wood Workshop at SVFK I continued this research. I observed that one of the simplest ways to minimally manipulate the metal and encourage it to shape itself in a new way was to cut out the corners of a square/rectangular sheet and join these again through the cutting lines. While the four corners naturally bend upwards when joined together, the metal’s body instinctively opposes to this folding, wanting to unbend outwards. These tensions generate a beautiful and complex double curve that is purely created by the material’s properties. The resulting bowl-shaped form displays a meaningful contrast. The rounded silhouette on the edge of the piece is defined by the material’s will. The angular shape on the bottom part is on the contrary determined by my imposed constraints through the folds.

This way, trough a minimal folding gesture, I partially indicate how the material should act. Yet the metode also provide a certain freedom for it to behave according to its own nature and to define its final appearance. The result is an object that can be used as a bowl or tray. By means of a very simple gesture, it acquires all at once its meaning, its function and its expression.

After numerous small mockups done with paper and thin metal sheet and a couple of one-to-one scale prototypes in raw steel, I produced the final prototype in mirror-polished stainless steel. Regarding the construction, the initial idea was to weld the four cutting lines in the corners of the plate. Thereby I could leave a smooth, clean, rounded outline on the top edge as per the first small mockups. However, this was unfeasible with the 0,5 mm thickness that I was working with. Being too thin to weld, I had to leave some flaps on the corners and use rivets to join them together. I believe the construction is an essential part of the design process. Indeed the result of the curves and lines produced by the flaps added visual strength to the piece. In addition, the industrial look of the rivets mixed with the quite elegant curves and overall look of the piece, results in an interesting and engaging contrast.

Letting the material be proves to also be beneficial in other ways, as through this folding process the entire structure is significantly strengthened. This allows a reduction in the thickness of the material to the minimum. 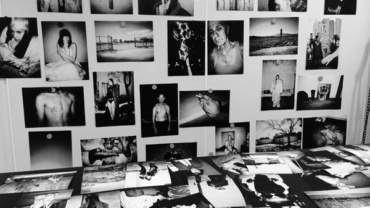 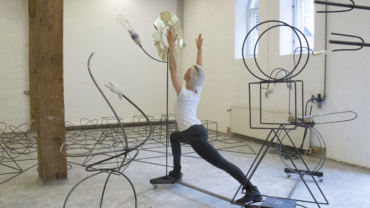 This Will Also Change

Maymò is a Spanish architect and designer based in between Madrid and Copenhagen. After studying architecture at the Superior Technical School of Architecture of Madrid and working as an architect for a while, her personal inquisitiveness led her to move to Denmark to study a MA in industrial design at Designskolen Kolding. She is now occupied in the fields of furniture, lighting and accessories design through my design studio, founded in Copenhagen in 2016, and have been working independently since January 2020, after three and a half years as a designer for ferm LIVING.

Latest News From the Workshops